Seen a Snake? Here’s What to Do [Step by Step] 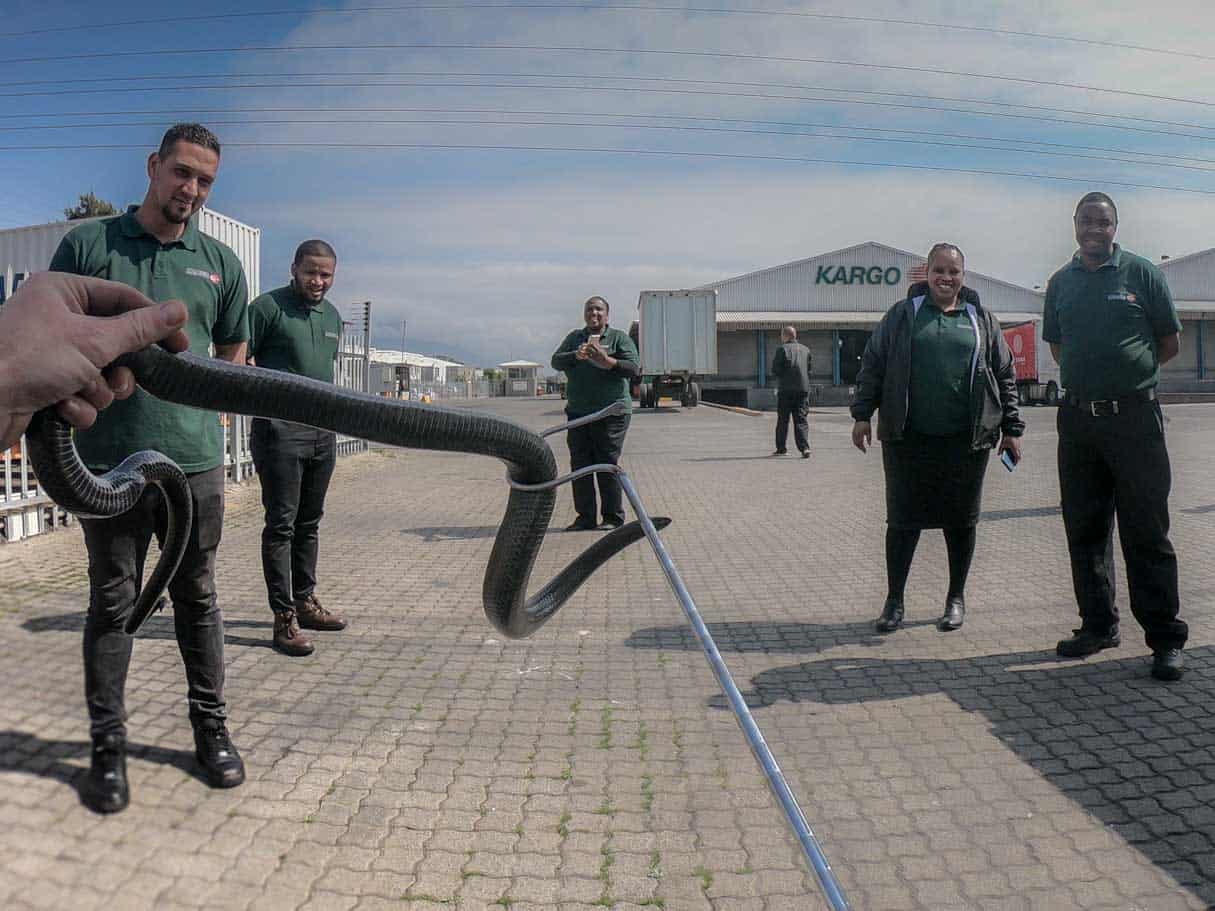 Whether you’re at home, out hiking, swimming or even at work, encountering a snake can be a surprising and scary experience, especially if you’re not sure what to do.

After reading this guide, you’ll know exactly what to do if you see a snake in most scenarios.

But, it’s important to realise:

The snake is scared, as I’m sure you are. Don’t act out of fear and try to hurt it as this is almost guaranteed to make things worse.

The worst thing to do if you see a snake is fight fear with fear.

If you encounter a snake and need it relocated, it’s best to leave it alone and give it space. If needed, contact a snake professional who can identify and/or catch the snake. Take a photo (if possible and safe) and keep watch of it until the snake catcher arrives.

I’ve Summarised this article in the video below on my channel Snake Smart.

If You See a Snake in your House

Can’t Get Hold of a Snake Catcher?

I know it can feel scary but try not to panic. The snake is not there to hurt you, I promise.

Odds are the snake you can see is nonvenomous.

Try to have the snake identified. Then you can make an informed choice about what to do next.

If you have a picture, click the button and one of us at Cape Snake Conservation will I’ll try to help.

If You See a Snake in your Yard or Garden

Why Snakes Should Be Left Alone

The venom can only be deadly if envenoming happens. Many snakebites are defensive dry bites where no venom is injected.

Snakebites often happen when people try to catch the snake themselves or try to kill them. An injured animal is a dangerous animal.

They are also ecologically important which means that getting rid of snakes is a bad idea.

If You see a Snake While Hiking on a Trail 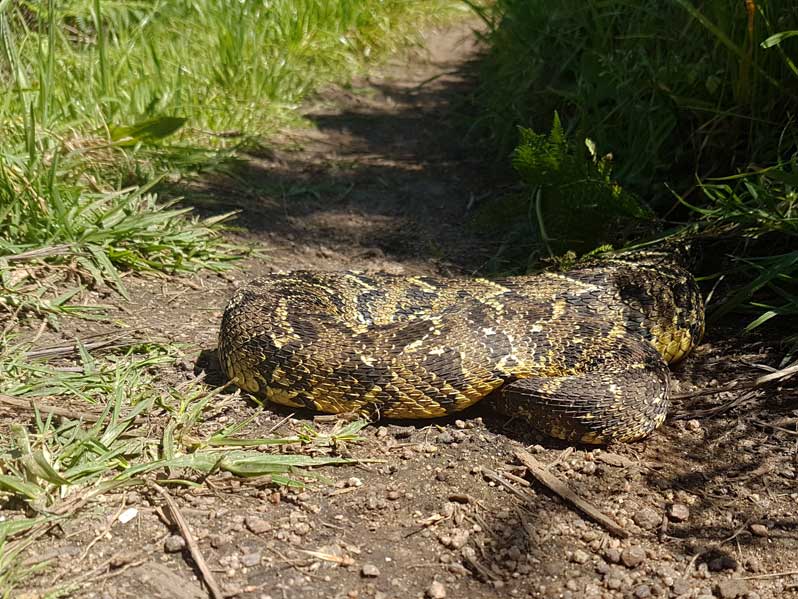 If You see a Snake While Swimming (Yes, they Can!)

…in a river or lake

…in a swimming pool 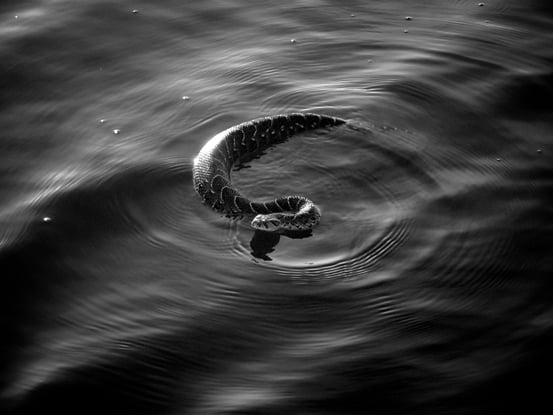 If You see a Dead Snake

While it might be tempting to pick a dead snake up, don’t do it unless you are 110% certain it’s nonvenomous.

Even if the snake has been dead a long time, you can easily nick your finger on a fang and get envenomated.

A few species, like the rinkhals, pretend to play dead as a defence against bigger animals trying to eat them. Pick it up and the snake’s reflex will be to protect itself.

Dead snakes can keep these reflexes even hours after death, leading to many myths and bites, as this Texan man discovered.

Is the Snake you See Dangerous?

This is a topic that my colleague Vard and I are very passionate about.

In our opinion, there is no such thing as a dangerous snake. This is a misperception that creates uneccesary fear and conflict.

Of course, some snakes have deadly venom. But the venom only becomes deadly if it is used. In most cases, the venom is used to protect themselves from sharp teeth and claws.

A snake will often bite and release its prey quickly, wait for it to succumb to the venom and then feed once it’s dead.

Venom is a modified protein which takes energy to produce.

So why would a snake waste venom on a much larger animal, aka a human, that it can’t eat?

That, my friends, is an excellent question. And there is only one answer, self-defence.

Whether or not this dangerous situation happened by accident or because of poor human behaviour is immaterial from the snake’s perspective.

Snakes don’t want to hurt us. Rather, they simply want to stay alive and will protect themselves to do so, just like us.

To illustrate what we mean, here is an infographic that Vard created.

This infographic really struck a chord and was shared on Facebook over 2300 times reaching more than a million people. 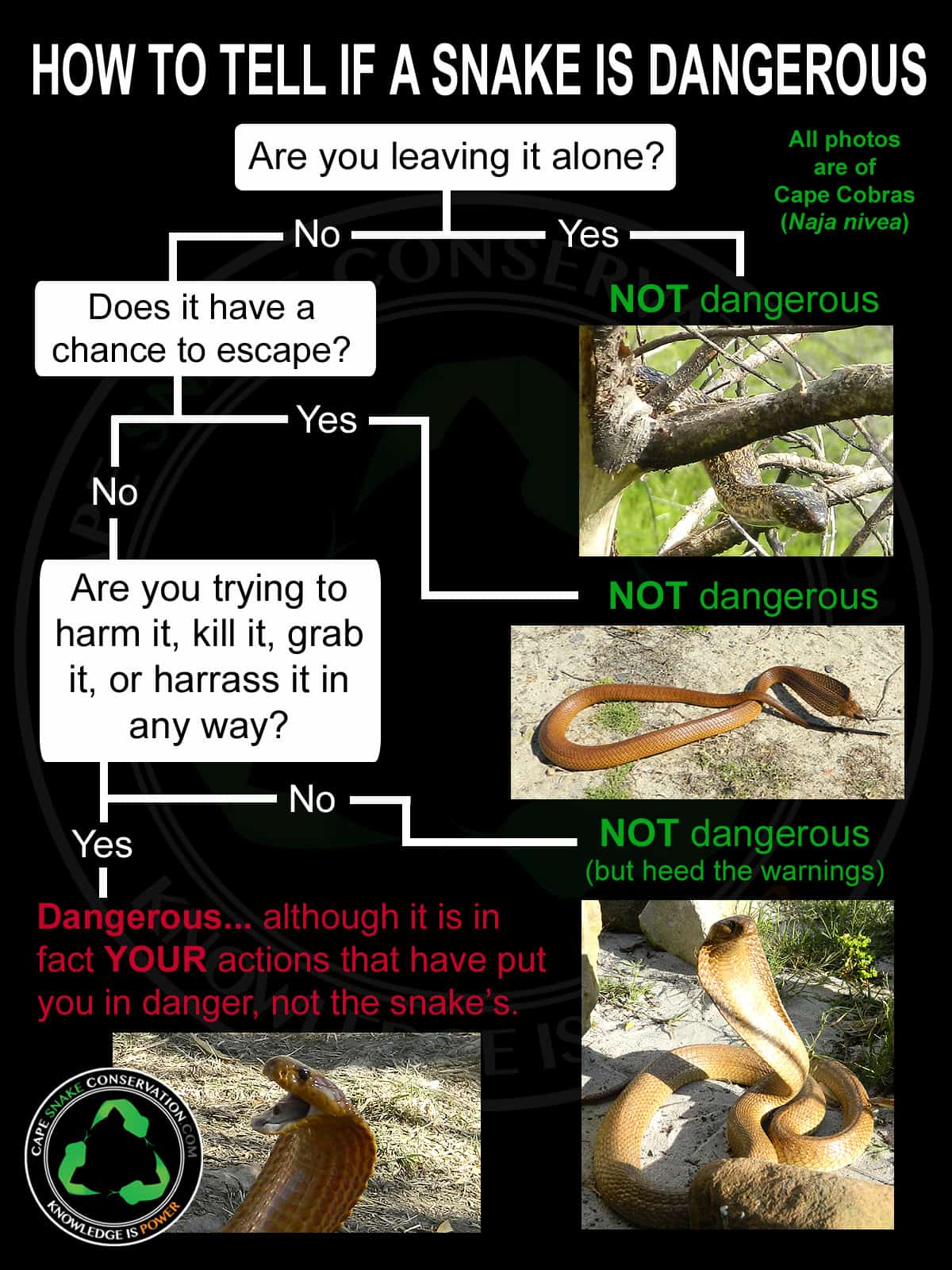 What Should you do if a Snake Chases you?

This might stir up some conflict because the perception, created by fear, is powerful. But I’m going to say it again…

Watch this video for proof.

We mustn’t confuse a snake taking flight in the same direction as proof that it’s chasing you.

We also mustn’t confuse a mock strike as a chase. Some snakes will advance and then disappear once you’ve backed off.

Do snakes want to hurt us?

The idea that snakes go out looking to hurt people is, simply put, wrong.

If they bite us, it is almost certainly a death sentence for them. Their venom takes longer to take effect than it does for us to retaliate.

Before they strike, snakes will usually give a warning. Hissing, hooding, spitting, rattling and coiling into strike pose are all signs that the snake is feeling scared.

Still Not Sure What to do if you See a Snake?

In all cases, it’s best to leave it alone. This is always the safest option. If you HAVE to move it, use a long object like a broom or stick to coax it out of the way.

Increase the distance between you and the snake. No need to run and no need to panic. This becomes much easier to do when we see a snake’s behaviour for what it really is, not what our fear shows us.

If you are very close to the snake, move away slowly as sudden movements might give it a fright and trigger a reflex response. When the snake feels safe enough, it will move off to safety.

If there’s any doubt, contact a professional snake catcher to either come and remove the snake for you or to at least identify it so that you can make an informed choice.

In my many years as a snake catcher, I’ve seen a lot of interesting snake behaviour. There’s one type of behaviour I rarely see and that is striking. Yet our mind tells us that the snake is only there to attack.

The reality is, and this is from extensive experience, that in almost every situation the snake will first take flight, rather than fight.

Give it that option and you and the snake will both be much happier for it.