An expert climber from Africa
?

This is the most complete guide to the boomslang snake online.

So if you want to know:

Then you’ll love the detailed, accurate and easy-to-follow, information in today’s guide.

If you haven’t spent much time in South Africa then it might be tempting to pronounce the ‘boom’ in boomslang as if it were a cartoon explosion and the ‘slang’ as if it’s a word describing informal language.

In the end, this guide is not about grammar, so you can pronounce it any way you want. But, if you want to get it right you say it like this…

How to pronounce Boomslang

Fun Fact: The boomslang is so famous it makes an appearance in JK Rowling’s Harry Potter. The boomslang’s skin is used in certain potions, most notably Polyjuice Potion.

The boomslang is a medium-sized snake that reaches a maximum size of around two metres in length.

They are relatively slender but not as thin as some of the other tree-living snakes.

They have noticeably large eyes, giving them binocular and colour vision, which can look almost comical in the youngsters because of their large size.

Their scales are rough with a strong ridge down the centre of each scale, also known as keels, setting them apart from other snakes like the mambas which have non-keeled or smooth scales. 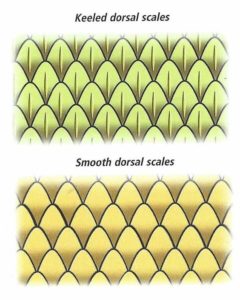 The young are typically a dull grey or brown underneath and darker on top.

They may be pink, yellow, or orange on the throat with varying spots of colour along the body – sometimes with a strikingly blueish hue.

Contrast this with a large emerald green eye and you have one spectacular looking little snake.

Adults can be just as striking but look quite different from the juveniles.

In some areas, male boomslangs are bright green while in others they might be pitch black on top and bright yellow below.

Female boomslangs are typically not as colourful and are usually a shade of brown or even red.

In almost all cases, the bottom (ventral surface) of the snake is at least a shade lighter than the top (dorsal) side of the snake.

In the black and yellow male boomslang, this is easy to see while in females and the green individuals it’s not as obvious but the distinction is there.

Looking for this type of difference can help to train the eye to spot differences for identification. 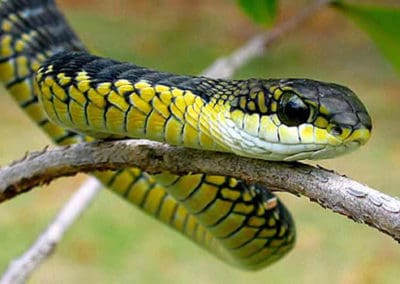 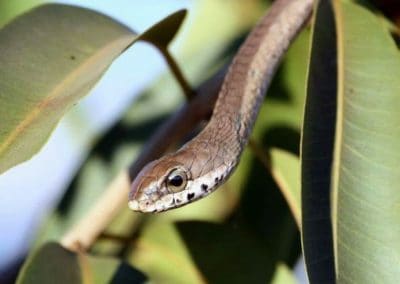 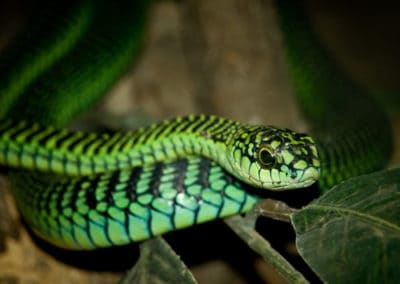 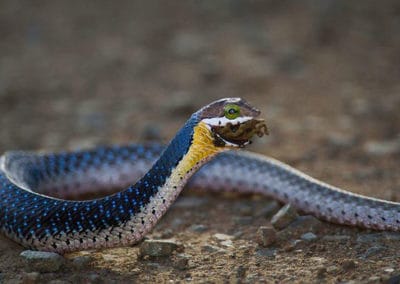 As you can tell by the name, the boomslang is an expert climber, often found in forested areas.

They are not restricted to trees, though. They will come to the ground occasionally to hunt, feed or even take shelter. The first boomslang I found was under a rock.

It was a lot bigger than the little brown water snake I was expecting to find. Luckily nobody was around to see me fall on my back as it bolted out from the rock I flipped 😉

The boomslang is Endemic to sub-Saharan Africa and has been recorded in the following countries:

Below is a map of where the boomslang is found in Southern Africa.

Boomslangs are diurnal snakes and commonly referred to as ‘shy snakes’ by snake handlers. They get this name because of their calm nature.

It’s rare to see a boomslang getting defensive and they very seldom strike. Instead, their strength and defence lie in their effortless ability to glide through the trees.

Under extreme stress or when in a vulnerable position, the boomslang will sometimes inflate its neck to make itself look bigger and more intimidating.

However, this behaviour is quite rare. It’s more common that the snake will disappear into the trees with speed like in the video below.

Because of this tree-living or arboreal nature, boomslangs are often mobbed by birds.

The chorus of bird distress calls is often what gives the snake away which otherwise would have passed through silently and unnoticed.

I created the video below to show to try and show this behaviour more clearly.

Enemies of the Boomslang

The boomslang, like all snakes, is not an apex predator. It falls prey to many carnivores but most commonly these are birds of prey like secretary birds, falcons, kestrels and ospreys, for example.

The mongoose is another expert snake hunter as captured belwo in this incredible photograph by Elana Erasmus.

Their biggest enemy is an animal know as man, Homo sapien, a large primate that is known to kill the snakes unnecessarily out of fear. 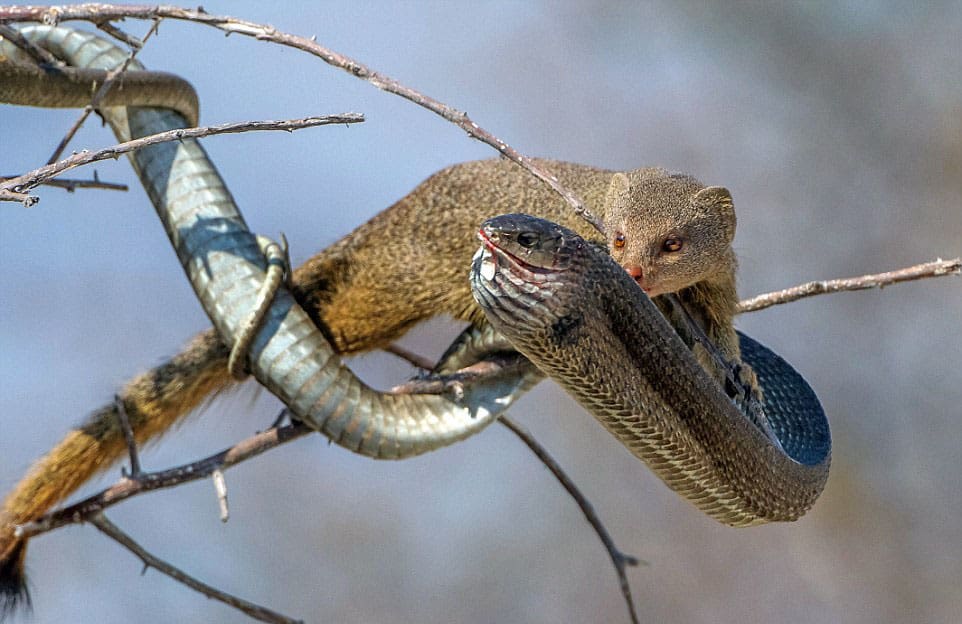 What happens if a boomslang bites you and can boomslang venom kill a human?

The answers to these questions were not well understood until 1957 when herpetologist, Karl Schmidt, was bitten on his thumb by a juvenile. He didn’t think the dose was enough to be fatal and documented his symptoms and experiences, almost to the end.

In fact, Schmidt was asked just a few hours before he died if he wanted medical care, but he refused because it would upset the symptoms he was documenting.

But his death was not in vain. He revolutionised our understanding by discovering that boomslang venom is primarily haemotoxic (hemotoxic).

Watch this amazing reollection of Dr Schmidt’s snakebite below.

Is the Boomslangs Africa’s most venomous snake?

Most snake experts and hobbyists will say yes. But actually, no.

Per drop, the boomslang is said often to have the strongest venom in Africa, more potent than the infamous Black Mamba.

However, while commonly used, measuring venom strength is not very useful. That’s because the testing is done on lab-mice and snake venom has evolved to be prey-specific.

This testing system is known in toxicology as an LD50 test. The abbreviation stands for Lethal Dose, 50% and refers to the amount of substance required (LD) to kill half (50%) of the test sample over a specified (fixed) time.

If the sample size is 100 lab-mice, then the amount of venom it takes for a snake to kill 50 of them gives us the Lethal Dose (LD).

This metric doesn’t take into account how much or where the venom is injected, how fast it acts and organism-specific evolution. Just because venom is deadly to a mouse doesn’t mean it’s deadly to a human and vice versa.

As clearly put by venom expert Wolfgang Wüster in this article “If you want to know how toxic something is, the first thing I’m going to ask is: ‘what do you want to kill?'” He continues, “There’s a species of mouse in Israel that weighs 20g and can survive a bite from a saw-scaled viper that would have you or me bleeding from every orifice and in intensive care.”

A far better metric would be to use survival rates in humans with no antivenom treatment, but again this doesn’t take venom yield into account.

Does a boomslang possess venom that is lethal to humans?

Are they drop for drop Africa’s most venomous snake as commonly claimed?

Well, it depends and actually, no.

Their LD50 is lower than other snakes in any case, but that’s for another article.

Another common myth is that boomslangs struggle to bite people as they can’t open their mouth wide enough and that they need to chew.

And while they are rear-fanged or back-fanged snakes, boomslang can still open their mouths at least 170 degrees and can penetrate the skin easily by ‘stabbing’ it.

It only takes a light scratch on the skin and a drop of venom to be envenomated.

However, it’s well known by snake handlers that boomslangs are a very placid species. It takes a LOT for them to react defensively and very few people have ever been bitten.

That being said, their venom is still potentially lethal and respect, as always, is the order of the day when spotting one of these incredible snakes.

Because boomslang venom is slow-acting, symptoms may not become apparent until many hours after the bite. Although the absence of symptoms provides sufficient time for procuring antivenom, it can also provide victims with false reassurance, leading to their underestimating the seriousness of the bite. 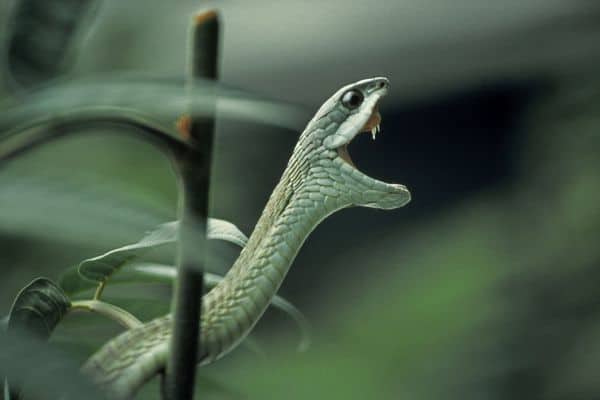 Boomslangs are daylight (diurnal) hunters that feed mainly on lizards, birds and eggs. They have large eyes with binocular vision and see in colour.

These snakes blend brilliantly into the foliage by remaining dead still while moving their head and neck side to side, mimicking a branch swaying in the wind. This movement might also help them to sight their prey better.

Once their food is captured, the potent venom allows them to subdue their prey quickly and feed from the relative safety of the treetops.

A bird flapping its wings violently might escape if the venom doesn’t act quickly enough. The venom also helps to break the food down making it easier to digest, especially as its swallowed whole.

Like puff adders, male boomslangs engage in sparring matches during the breeding season. The snake that dominates the other wins and gets to mate with the female.

She will then lay between 10 and 25 (up to 30) eggs in a humid location like a hollow tree trunk or heap of decaying plant matter (think warm compost heaps, for example).

Like most snakes, boomslangs do not care for their young. They lay their eggs in a suitable environment and then move off.

After about two to three months, the eggs hatch and the young boomslang emerge ready to fend for themselves.

Young boomslangs are breathtakingly beautiful. They are more colourful than the adults and have oversized emerald green eyes, sometimes showing flecks of blue and orange along the body.

At only around 20cm the young snakes are incredibly vulnerable and most will not make it to adulthood. Those that do might reach a size of nearly two metres and live for around 15 years.

While the boomslang is not threatened with extinction they are, like all snakes, unnecessarily killed out of fear.

My hope is that we can learn to respect and enjoy them for the marvels of evolution that they are.

While the boomslang is not threatened with extinction they are, like all snakes, unnecessarily killed out of fear.

My hope is that we can learn to respect and enjoy them for the marvels of evolution that they are.