An Iconic Cobra from Southern Africa
?

Diet: Everything (including other snakes)

This is the most complete guide to the Cape cobra online.

If you want facts on:

Then you’ll love the detailed, easy-to-follow, information in today’s guide.

But first, a quiz:

Which of the six below is a Cape cobra? Answer is at the end of this article. 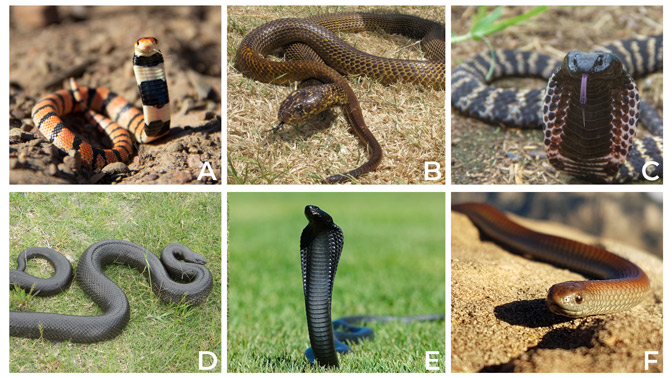 Although common in much of it’s range, very little is known about it’s biology and ecology.

Here we’ll take a look at what is known so far.

Fun Fact: Naja comes from the Sanskrit word nāgá (नाग) meaning serpent/snake. The second part nivea (from niveus) means snowy, but nobody knows for sure what the true connection is.

The Cape cobra is a medium-sized snake that reaches a maximum known length of just over 1.8 m (71 inches).

Cape cobras vary in colour, from bright-buttery yellow, to dark brown, speckled and even a reddish black. Because of this the snake has many colour based names such as the yellow cobra, the brown cobra and the speckled cobra (among others) leading to some confusion and the belief that there is more than one species.

We don’t have a complete picture on what drives this variation but habitat and soils likely play a role. In the desert regions the “yellow cobra” is more common but all forms can be found in one location, even in small geographic areas of a single habitat type. 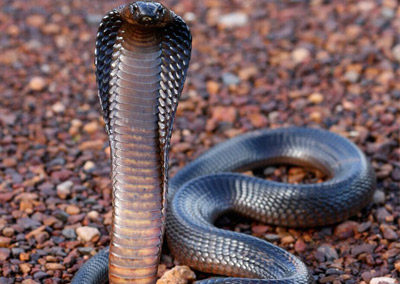 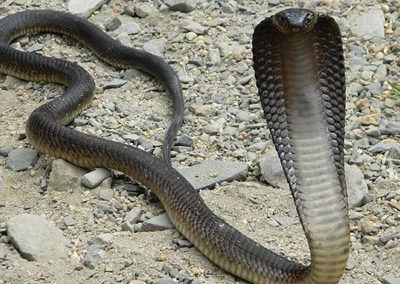 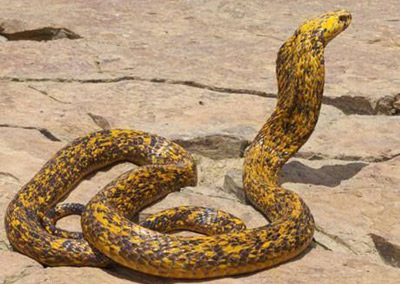 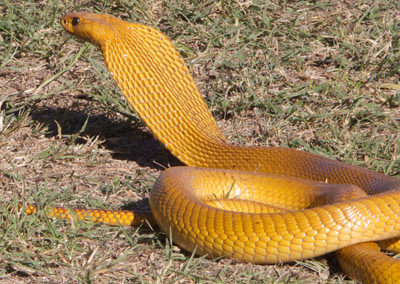 The variation doesn’t end with the adults. Juveniles typically have dark throat bands; these vary in size and number as outlined by my colleague Marcel Witberg here. The bands usually fade after a year or two but may be subtly recognizable into adulthood in some individuals.

Young Cape cobras may also have markings/ banding on the upper (dorsal) surface. This closely resembles the markings in the young of some rinkhals populations. Rinkhals also have throat bands (albeit pale not dark) which leads to further confusion.

Why haven’t I mentioned the hood yet?

Because cobras spend most of their time moving around with their hood in. They don’t display this iconic feature all the time, which also leads to confusion.

Just because it’s not hooding, doesn’t mean it can’t be a cobra.

And just because it is hooding, doesn’t mean it is a cobra.

The rinkhals and Cape coral snake are examples of cobra-like snakes found in the same location that also spread a hood. Black mambas sometimes spread a small hood and I’ve witnessed a puff adder in Zambia doing the same. 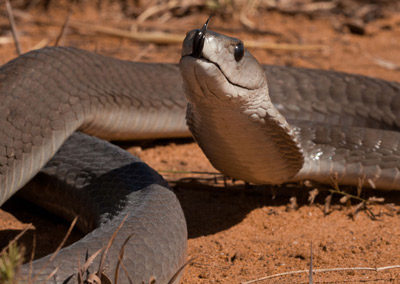 In short, hooding can help with ID but only when combined with other features.

Cape cobras have smooth scales (keeled in rinkhals), enlarged/ chubby cheeks where the venom glands sit (unlike mole snake) and the end of their tail is often darker than the rest of the body.

And, unlike the black spitting cobra, the bottom (ventral) surface of the Cape cobra is at least a shade lighter than the top (dorsal) side.

Endemic to southern Africa, the Cape cobra lives across a variety of habitat types from fynbos to desert to the relatively high altitude forests.

It’s most common in South Africa but also occurs in parts of Lesotho, Namibia and Botswana. 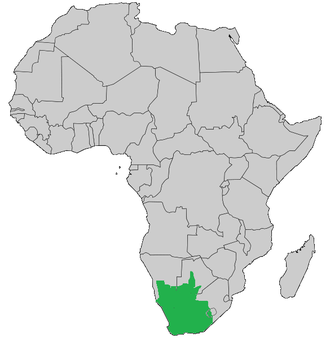 Unlike some of their relatives, Cape cobras are almost strictly diurnal. In extremely hot weather, however, they adapt their behaviour and become active in the hours just before sunrise and just after sunset.

They are lively snakes which are just as comfortable on the ground as they are in trees. When not active they will use a variety of habitats for cover such as old termite mounds, holes in the ground, brush and wood piles.

Like all snakes, hiding is their first line of defense followed by flight, deter and then lastly fight.

Their impressive hood gives them no hunting advantage. Rather, they use it to absorb more sun when basking and to make themselves bigger when threatened. I’ve observed a number of Cape cobras mock-charging in what appears to be an attempt to move a threat away.

Snakes are not alone in this anti-predator adaptation; elephants spread their ears and mock-charge, dogs and cats raise the hair on their backs and bare their teeth, while invertebrates might use striking patterns or behaviour to achieve the same result.

The behaviours (seen below) are for defense and self-preservation, not unprovoked aggression as is commonly believed. 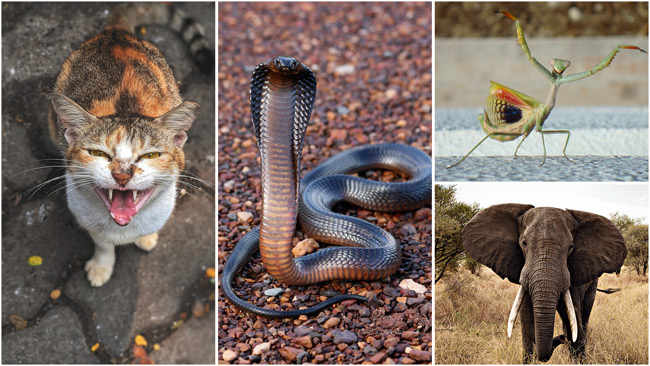 Cape cobras are daylight (diurnal) hunters that feed on just about anything they can swallow. They’ve been recorded eating everything from birds eggs to other snakes (like the puff adder below), and even roadkill.

Unlike ambush hunters like the puff adder, they actively seek out there prey and are well known for raiding rodent burrows and sociable weaver nests. 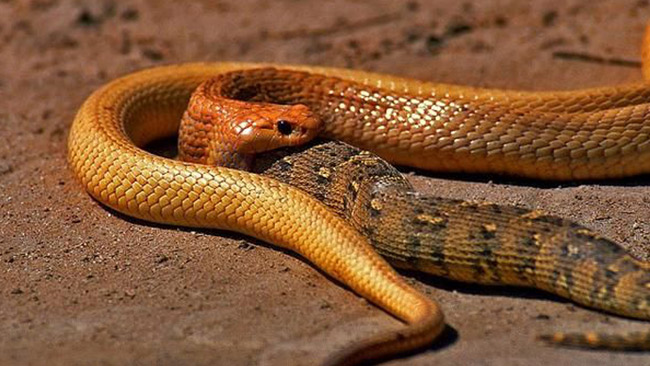 Their potent venom allows them to subdue their prey quickly and minimise injuries caused by claws and teeth.

A bird flapping its wings violently might escape if the venom doesn’t act quickly enough. The venom also helps to break the food down making it easier to digest, especially as its swallowed whole.

Enemies of the Cape cobra

The Cape cobra, like all snakes, is not an apex predator. It falls prey to carnivores like the honey badger and birds of prey like secretary birds and snake eagles.

Meerkats and various mongoose species are also know to give the Cape cobra a very hard time due to their high tolerance of cobra venom. 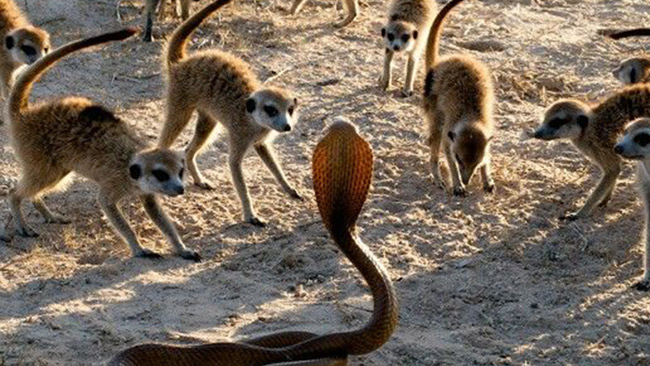 Their biggest enemy is a large primate, Homo sapiens, that is known to kill snakes out of fear.

Today, the Cape cobra is one of the most feared species of cobra in all of Africa by virtue of its potent venom and frequent occurrence around people.

Cape cobra venom is made up of neurotoxins and might also contain cardiotoxins that affect the respiratory system, nervous system, and the heart.

The Cape cobra is belongs to the family of venomous snakes commonly known as Elapids. They are characterised by having hollow fangs, fixed on the upper jaw at the front of the mouth. The Cape cobra delivers its venom through these fangs when latching onto a prey item.

The mortality rate for untreated bites in humans is not exactly known, but is thought to be relatively high. This can be due to various factors including the amount of venom injected, psychological state of the bitten subject, the penetration of one or both fangs, and so on.

Mechanical ventilation and symptom management is often enough to save a victim’s life, but in serious cases antivenom will be required.

Very little is known about Cape cobra mating behaviour. In an observational study done by the late Tony Phelps he noted a drop of blood on the back of the head of a female, indicating fang penetration as part of mating, but he was not able to confirm this through direct observation.

After mating somewhere between September and October, Cape cobras lay 8-20 eggs between December and January in a suitable warm and humid environment.

After about 2 months, the young cut the shell with their egg tooth and stick their head out while absorbing the last bits of noroushing egg yolk. 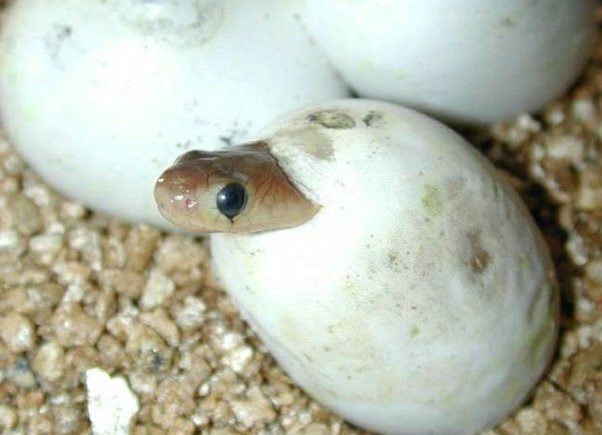 They emerge and a short while after and their battle for survival begins.

Most will not make it to adulthood.

If you’ve made it this far, great job!

While the Cape cobra is not threatened with extinction they are, like all snakes, unnecessarily killed out of fear. My hope is that we can learn to cooexist through understanding and mutual respect.

And now for the quiz answer…

I would love to hear from you. Come and say hi and let me know what your answer was in the comments of the video on my YouTube channel, Snake Smart.

For bonus points and some snake cred let me know what each of these snakes are – A to F.