Ok so this isn’t really the best move if we’re talking snake conservation. Chopping the head off of a snake is really the last thing that we 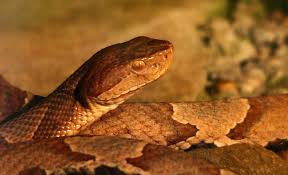 want to be seeing. I understand the thoughts process, kids, dogs and your own safety.

But killing a snake is very often a dangerous affair. Either it only aggravates aggravates the snake more (more reason for the snake to bite in defence) or a person picks up the freshly killed snake thinking that it’s dead.

We all know that chickens continue to flop around, flap their wings and even run after being decapitated. But did you know that it is possible in snakes as well?

Sam Billiter, posted a public video facebook on Monday of a writhing copperhead snake – “I wanted to take a video of its body moving without its head and within a couple of seconds it bit itself,” Billiter said. “That’s some crazy stuff right there.”

This could really have turned out far better for the snake – and far worse for Sam Billiter. Calling a trained snake handler would have been a far better response. Snake bite is easy to avoid  – you simply leave the snake alone!!

In the video the decapitated copperhead snake still bites after having its head fully chopped off – watch, it’s quite incredible!!

Now just imagine that this snake was not writhing around as much and someone came across it thinking it was safe! What if the dogs found it dumped in the bushes?

If you find a snake, don’t try to emulate what Sam Billiter did. Leave it alone, call a snake handler and keep people and pets away. That way there are no nasty surprises for either animal or snake.

I hope they like rats, they’ll probably get a few more now.